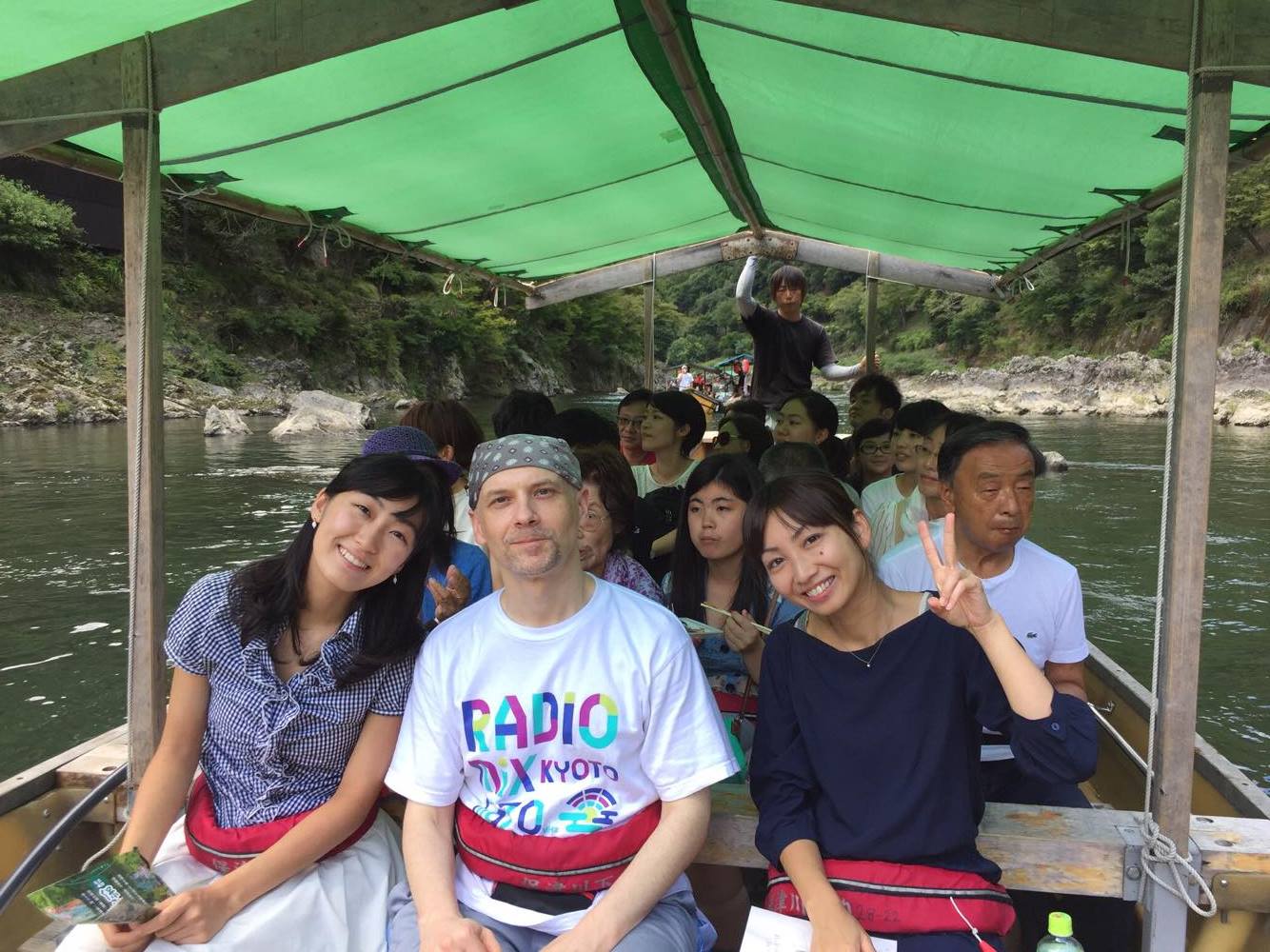 On August 23, 2016, Hiromi, Michiko, and I rode the Hozu River all the way to Arashiyama—which marked my first visit to that very famous tourist destination. I recommend entering Arashiyama in this grand fashion!

It was a terribly hot day, and the white-hot Japanese sun was beating down on us relentlessly. I felt so bad for the pilots of our boat, all of whom were bronzed from the Eastern sun. Luckily for all of us, the many bends in the Hozu River gave us reprieve from the oppressive fireball in the sky.

Just prior to our journey, we were granted an interview with a gracious man who wore a perpetual kind and warm smile on his face. I really liked this gentleman and cursed the language barrier between us. More motivation for me. He happily told us the history of the Hozu River and its many significant landmarks. It should also be mentioned that many men lost their lives in the effort to make the Hozu traversable for the rest of us. 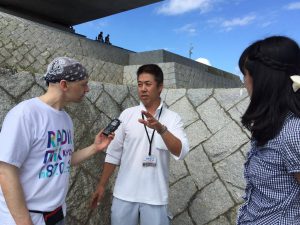 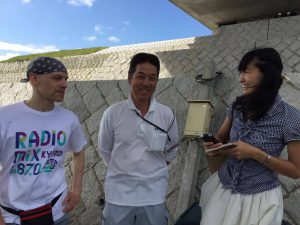 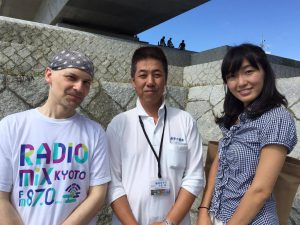 We stepped into a traditional-style boat, piloted by three oarsmen, who alternated along the river ride. One man would push a sao, or long stick, into the riverbed and then run towards us, propelling the boat forward. Another sat in front of him and pushed an oar in the water. The third pilot was at the back. The front oarsman would be the tour guide, offering all manner of info and entertainment. The creaking you hear is the sound of the oar rubbing against the rope and wood of the boat with every stroke.

The river’s depth varies as you go, as does its currents. Some parts of the river are violent and fast, while others are like the doldrums, and you can see the oarsmen straining to push us through waters that seemed bent on holding our boat captive. Passing through some of the rushing waters and feeling the boat get swept away, seeing the pilots struggle against nature to keep us safe... I was reminded of those men who gave their lives so that we could sit comfortably and enjoy this trip through one of Japan’s best-kept secrets. 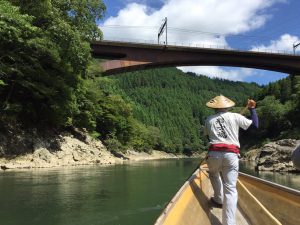 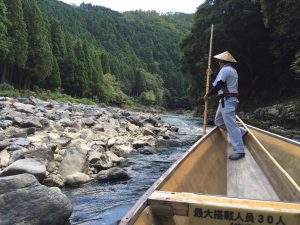 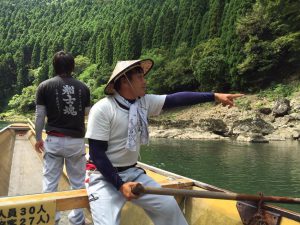 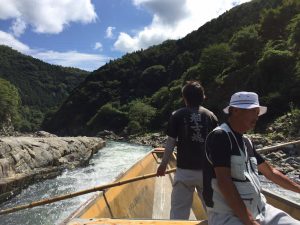 We passed through several ravines and I marveled at the way the forests of trees up in the mountains seemed to defy gravity as the pointed straight up, despite their precipitous plunge down near 90-degree drops. It was almost like someone picked up the entire forest and turned it on its side, but the trees refused to comply.

But what struck me most was the contrast of ancient nature and modern advancement. Seeing a centuries-old ravine connected by an overhead Japan Rails bridge was as much humorous as it was fascinating. We were a million miles from modern civilization, and then all of a sudden is this bridge cuts into our ancient world as though out of some time-warp. 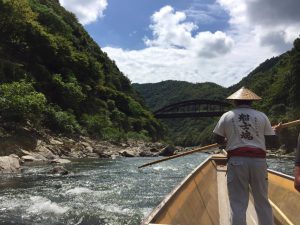 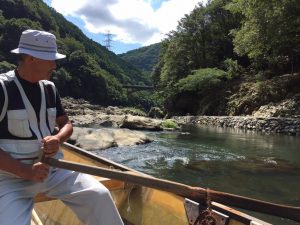 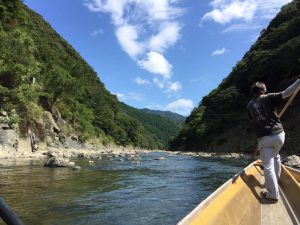 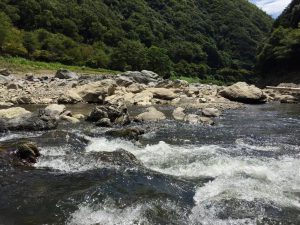 Speaking of which, my journey on the Hozu River also marked the first time in my life that I had ever seen monkeys in the wild. There was a small island out in the river, and a bunch of monkeys were playing on it. I’ve been living here in Japan for four years now—and have done my share of traveling—but the one part of this country that seemed to elude me this whole time were the saru, or monkeys. It was great seeing one of the little monkeys miss a jump and land in the water. I swear his buddies were laughing at him. LOL

The JR tracks weren’t the only modern-world guests into this ancient place. As our journey was reaching its end, a floating convenience store, or konbini, pulled up along our left-hand side. They were selling all the typical convenience store fair—potato chips, sodas, canned coffee, and beer—and they were even cooking squid legs and other Japanese fairground favorites. Michiko was kind enough to buy some mitarashi dangos for the three of us. Delicious! 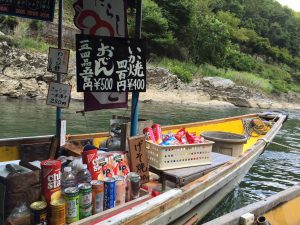 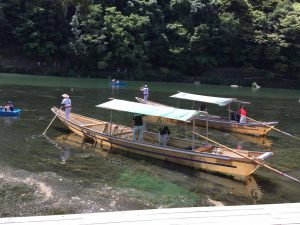 As the floating konbini drifted off to our left, Arashiyama came into view at our right. This signaled the end of our journey, but I would be given one last unforgettable treat: The chance to sit in the pilot’s seat and row, row, row the boat. It was a blast, but I don’t think I could do it for two hours straight. Our pilots were amazing! 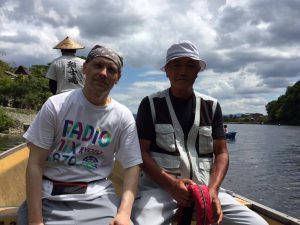 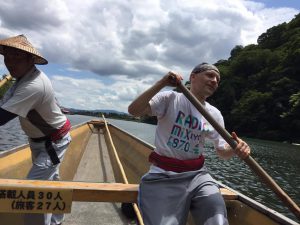 If you’re here in Kyoto, please strongly consider making a detour in your plans and take this most memorable trip down the Hozu River. Yes, the pilots only speak Japanese, but the sights and sounds of the Hozu’s natural beauty transcend language. You won’t need an interpreter to tell you that this is one experience you will remember for the rest of your life. 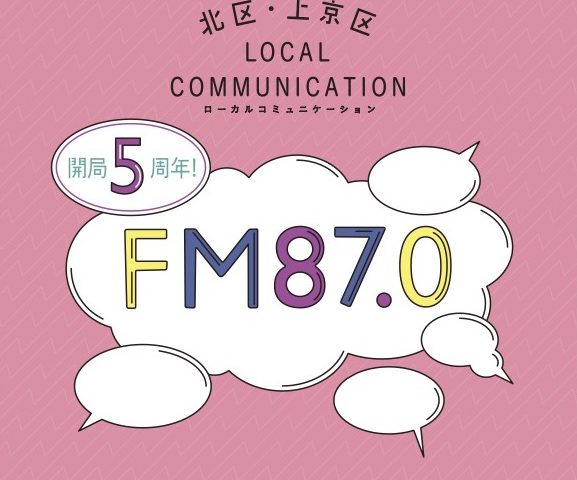